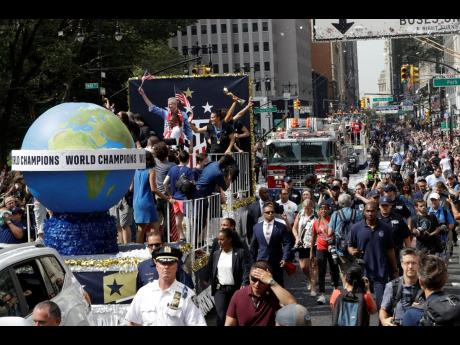 A float with members of the US senior women’s football team and New York Mayor Bill de Blasio (left, back of the trucks) makes its way up Broadway in a ticker-tape parade along the Canyon of Heroes in New York City yesterday. 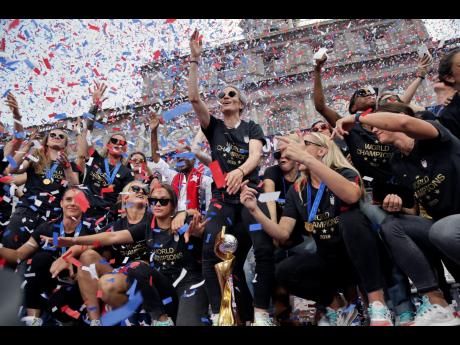 NEW YORK (AP): Adoring fans packed New York City's Canyon of Heroes yesterday amid a blizzard of confetti to praise the FIFA Women's World Cup-winning US senior women's football team as athletic leaders on the field -- and as advocates for pay equity off it.

Crowds chanted "USA! USA!" and workers sounded air horns from a construction site as the hour-long parade moved up a stretch of lower Broadway that has long hosted so-called ticker-tape parades for world leaders, veterans and home-town sports stars.

Aly Hoover, 12, of Glen Ridge, New Jersey, stood at the sidelines with a poster of the face of Alex Morgan, another team star. "I just want to be like them," she said.

Garret Prather brought his newborn son "To celebrate how the American women made us proud on and off the field".

The team sealed its second consecutive tournament win by beating the Netherlands 2-0 on Sunday. It will get US$4 million (roughly J$527 million) for winning the World Cup from FIFA, the international football's governing body. The men's French team got US$38 million (just over J$5 billion) for winning last year.

The US women's team has sued the USSF for gender and pay discrimination. The federation will give the women bonuses about five times smaller than what the men would have earned for winning the World Cup. The case is currently in mediation.

Kate Lane, who watched the parade, called the pay gap "massive" for the players and "across the board" for most women.

"Especially in male-dominated professions," said Lane, of Limerick, Ireland. "Women put just as much commitment into their work as their male counterparts."

She's hopeful the younger generation is soaking up the message from the women's team, noting a girl about seven years old wearing an 'Equal Pay' T-shirt.