Records galore as Tallawahs lose to Patriots in run feast 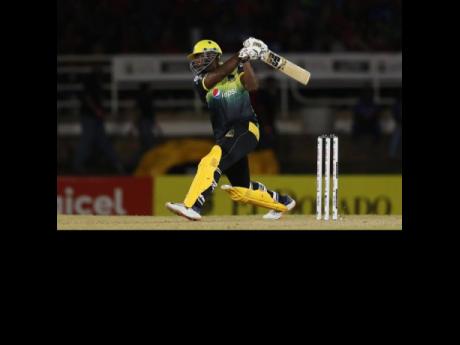 It was a night when the bat completely dominated the ball on a batting paradise, however when the dust settled, the St Kitts Nevis Patriots defeated the Jamaica Tallawahs by four wickets in match seven of the Caribbean Premier League in Basseterre yesterday.

Batting first, the Tallawahs posted a mammoth 241 for 4 off their allotted 20 overs with the 'Universe Boss' Chris Gayle hitting his fourth CPL hundred of 116, which included seven fours and 10 sixes in 62 balls.

The towering left-hander shared in a record 162-run second-wicket stand with Chadwick Walton who weighed in with an impressive 73 from 36 balls. Walton played some lusty blows of his own, hitting three fours and eight sixes.

Fabian Allen and Alzarri Joseph finished with two wickets each for the Patriots, who were in record-breaking mood themselves when they had their turn at the wicket.

Opener Evin Lewis smashed a record 53 runs from 18 deliveries to set up the frantic run chase as the Patriots got to the record target of 242 for 6 in 18.5 overs.

Lewis was well supported by fellow opener Devon Thomas who batted for 13 overs to get 71 from 40 balls with eight fours and three sixes.

Englishman Laurie Evans weighed in with 41 runs from 20 balls, while Jamaica's Fabian Allen scored an unbeaten 37 runs from 15 balls as the Kittitians got home with seven balls to spare.

Oshane Thomas, who pegged the Patriots back somewhat with three wickets in the 13th over, finished with four for 53, while Andre Russell took two for 54.

Winning captain Carlos Brathwaite had praises for his batters who pulled off the remarkable feat.

"This win means a lot, a lot of people turned out tonight, We call it the fortress and we wanted to give them a show. We thought they were probably 20 runs too much. This win will do a lot for the team," said Brathwaite.