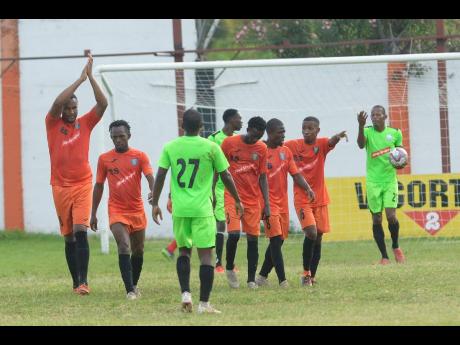 Molynes United coach Calvert Fitzgerald appeared lost for words in his post- match interview after the team went down 2-0 to Tivoli Gardens in the Red Stripe Premier League at the Edward Seaga Complex yesterday.

Goals from Newton Sterling and Trayvon Reid gave the home team their fourth win of the season and keep them 10th with 18 points, but four points clear of the relegation zone.

Molynes, who won their first six games of the season, have now lost six straight matches and have gone 11 games without a win.

Fitzgerald said that after six straight defeats, they need a positive result to stop what he describes as “the haemorrhaging.’

“After every match, we try to work on the mistakes we make and try to see if we can not make those mistakes in the next game,” Fitzgerald said. “So we just have to continue that process and continue to train and hope our luck will turn.

“It’s going to be tougher after this, extremely tough. But we need to get something, even a draw, so we can stop the haemorrhaging and get ourselves up.”

After an equally contested first half, Molynes had the best opportunity to go in front but Anthony Greenland could not convert a sitter from close range.

Newton Sterling put the host ahead three minutes before the interval when he was left unmarked in the area and controlled and fired a low shot past Leon Taylor in goal.

The visitors gave a good account of themselves after the break but Greenland squandered another two chances to get his team on the scoresheet. Then in the last minute, Reid got by his marker in a one-on-one situation and curled the ball inside Taylor’s near-post for the insurance goal.

Tivoli coach, Philip Williams, said the improved fitness of the team has been positive on their performance and they are now aiming for their first consecutive win of the season.

“We have been doing a lot of work to get the boys up to par where fitness is concerned, as that was hampering us in the first round,” Williams said. “Today’s [win] basically came from the work we have put in.

“We have dug ourselves a deep hole and it’s going to take some time [getting out], but we just have to be patient and take it one game at a time. We have been playing [well] but we have been lacking in fitness, which leads to a lack of concentration in the latter parts of the game, and we lost a lot of games in the last few minutes.

“So with the fitness improved, we can see the guys concentrating and running for longer periods. That is what we need as that is what is going to get us out of the situation that we are in.”