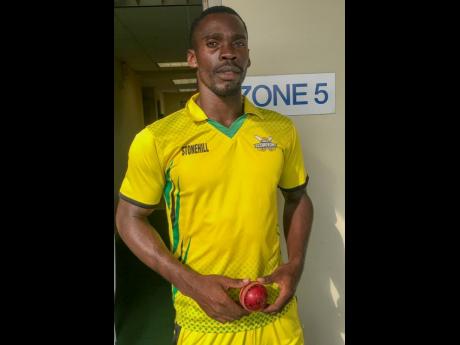 Gordon was in scintillating form with the ball for the Scorpions at the weekend. He bagged six wickets against the Barbados Pride in the second innings to end with match figures of eight for 73, albeit in a losing effort.

The former Windies Under-19 right-arm fast-medium bowler has credited his recent success to the hard work he has been doing off the field.

"I feel great getting my first five-wicket haul of the season," Gordon told STAR Sports. "I have been training hard and doing a lot of spot bowling in practice and I continue to back myself even when things are tough. That performance is history now and I just want to go out and continue the good work."

Despite picking up his best bowling performance of seven for 70 away against the Trinidad and Tobago Red Force last season, Gordon was left out of the opening first-round match against the same team earlier this year.

After not seeing much game time last season, the Westmorland native was keen to prove to the coaching staff that he has the goods to do well at the top level. So far, he has been the standout pacer with a team-leading 10 wickets in two matches at the lowest economy rate of 2.96.

While not being overly confident, the 28-year-old Kensington Cricket Club fast bowler says he is not targeting a specific overall wicket tally this season.

"I aim to stay focused and do the things that have been working for me," he said. "Once I stick to the basics, wickets will come."

The Scorpions, who are at the bottom of the standings with 21.2 points, will next face defending champions and leaders Guyana Jaguars from February 6 to 9 at the Guyana National Stadium.