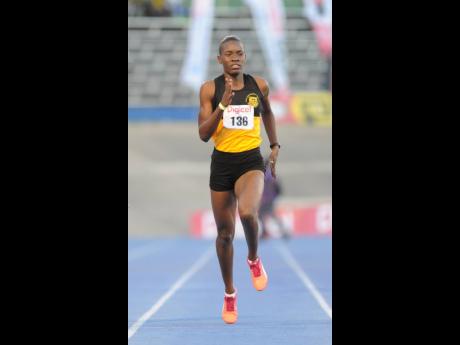 Dawnalee Loney has big dreams and with her studies behind her, the 400m runner says she is giving athletics all her energy. Loney, the former Balaclava High School, Camperdown High, and The Mico University College runner, is aiming high.

With her degree in physical education safely tucked away, the tall one-lap runner is fully focused.

"Yes, I'm finished, thank God. It was a long journey but I have made it," she said of her studies at Mico.

While she was at Mico, she gained vital international experience at the World Relays and now the 2014 and 2015 Carifta Games runner-up is ready to crank things up. She is learning from coach Maurice Wilson as a member of the Sprintec Track Club.

"It's difficult but with dedication and hard work, I know I can get there. I trust and believe in my coach and I know he can take me to the next level."

Loney, who won the Class One 400m for Camperdown High at the ISSA/GraceKennedy Boys and Girls' Championships in 2015, knows why she runs.

"I know that I'm destined for more," she said. "You know, I can feel it each day. I have big dreams and they won't allow me to sleep in peace at nights, you know, so I know I have to put in the work because I know I can get there and I know I will soon."

The 2017 and 2018 Intercollegiate Championship 400m silver medal winner followed that January 11 effort with another 200m race on January 25 at the Queens/Grace Jackson Invitational Meet. She was second on both occasions to CAC 400 400 hurdles champion Ronda Whyte at GC Foster, and to former Mico teammate Tiffany James-Rose, respectively.

Owner of a 52.05 second personal best, the 23year-old helped Jamaica to the silver medal in the 4x400m at the 2015 Pan-American Under-20 Championship.