Maximum effort pays off for Archer 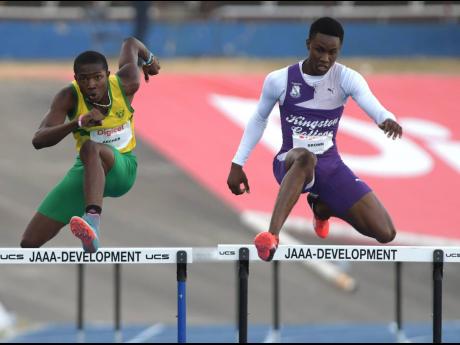 From left: Excelsior’High School’s Devontie Archer with Kingston College Shantamoi Brown in the boys 15-16 400m hurdles , at the GC Foster Classics at the National Stadium on March 11, 2018.

While some favourites tumbled at the Carifta Trials last weekend, Devontie Archer of Excelsior High School produced maximum effort to win the under-20 400 metres hurdles as expected. Archer powered to the fastest time of his life - 50.88 seconds - and enhanced his status as a ISSA/GraceKennedy Boys and Girls' Athletics Championship favourite.

He survived difficulties at hurdle eight and 10 and a challenge from Rayon Campbell of Kingston College to lower his personal best from 51.20 seconds, the time that earned him the silver medal at Champs last year. "I'm very proud of my self because I came out here to give a max effort and I think that's what I did and it did show in the results," he said gratefully while catching his breath after the race.

He collected the Corporate Area Championship title last month with a win in 51.56 seconds.

With Champs just around the corner, Archer hopes he and his coach David Riley can erase the troubles he had late in the race. "There is a lot of work to put in order to get better results, but I think I can run faster", posited the 2018 Carifta Under-18 champion.

He outlined the key steps he hopes to take to gold. "Make sure we get all these hurdles as best as possible and it will lead to a success, a victory," he said.

Even though he wants to win his first individual Champs gold medal, his underlining target is simple. He just wants to improve. "I'm dreaming of a better Devontie than last year. Anything that is better than the Devontie from last year, I will really appreciate it," he determined.

Unfortunately, the major loss to Jamaica's 2020 Carifta team is defending under-20 100 metre Oblique Seville who succumbed to injury in his first-round race at the Trials and did not report for the final.

Shaquena Foote of Petersfield lost the chance to defend her under-20 400 metre crown by placing third at the Trials but won the 400 hurdles and will be able to attempt a title defence in that event.