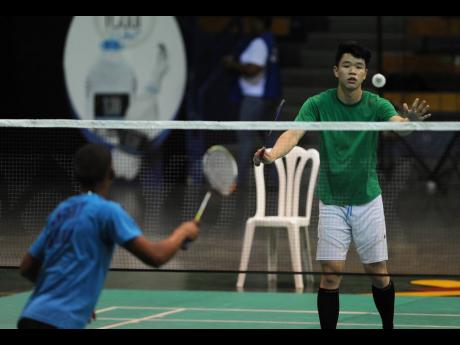 Anthony Murillo of Panama (blue) and Matthew Lee of Jamaica take part in a rally at the Jamaica International 2017 badminton tournament at the Indoor Sporting Centre on February 3, 2017.

National badminton champion Matthew Lee is advising athletes not to despair if their training is being hampered by the outbreak of the novel coronavirus and the resulting restrictions.

Lee, who is a University of the West Indies medical student, says the most important thing is for them to be safe.

Lee himself has been unable to do more than lift weights at home. "I really can't run or anything but it's better than doing nothing, but obviously, I haven't got to play," he said on April 6. His advice to fellow athletes comes from that perspective and that of a future doctor. " The first thing, the most important thing, is be safe. Try to take care of yourself, follow the protocols, and the next would be if you find yourself in a situation where you can't train like you want to be training, don't beat yourself up over it because it's not like the situation is under our control," he said.

Lee has been affected on the badminton court and off it. Local and international tournaments are off for the time being, and his matriculation to the final year of his medical studies has been halted by the closure of the university due to the spread of the virus.

He is using the enforced break to analyse his game. "You get a lot more time to reflect, as I have been doing since the last tournament. I did perform well but I felt I could have done better," Lee said in a review of his effort at last month's Jamaica International. He and Dennis Coke won a bronze medal in doubles, but Lee has broken down his early loss in the singles to top-seeded Guatemalan Kevin Cordon. "I think I played a very good match. I played the number 1 seed, though, in the first round. I played well but it never went my way," said the Jamaican champion.

The Japanese duo of Takama Obayashi and Yushi Tanaka took the top spots in the singles and left Lee mightily impressed. "Their legs are strong but you could see that physically we're stronger than them," he observed, "and they are hitting the shuttle very hard, they're more consistent, they're so quick."

He summed up his analysis, saying, "I've been doing a lot of research and it's not just physical. It's all the technique details, the little things."

When normality is restored, he will modify his training based on what he has learnt. Moreover, he is weighing the possibility of training abroad. "I'm not sure yet," he mulled, "I'm really not sure what's going to happen. Even before this corona, it's still an option."