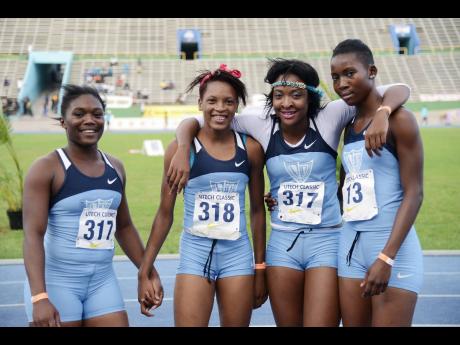 Members of the Edwin Allen High sprint relay team which registered 43.95 seconds for second in the 4x100m at UTech Classic at the National Stadium in 2014.

Edwin Allen High School now can crack the 44-second barrier in the 4x100 metres almost at will. However, Edwin Allen coach Michael Dyke remembers when it wasn't so easy and believes the first sub-44 set the tone for big performances.

The barrier was breached at the 2014 UTech Classic on April 12. Supreme in class 1, Christania Williams, Claudette Allen, Saqukine Cameron and Monique Spencer needed a new challenge. "We begged them to allow us to run with the college women to see how we match up against them and we did very well. We didn't beat them but the time was exceptional," recalled coach Dyke last week.

The winning time was 43.31 seconds with Williams, Allen, Cameron and Spencer recording the first sub-44 in the history of high school athletics - 43.95 seconds. Edwin Allen has run under 44 on five more occasions since then but Dyke treasures that first one. "Definitely, because that would have been the first sub-44, from my recollection, and that sort of set the tone for the rest of the relay teams," he confirmed. "So every year we sort of look forward to be running sub-44, especially when it turns out for the period after Champs, where we can combine the class 3s and 1s."

The fastest ever time by Edwin Allen - 43.62 seconds - did indeed come after Boys and Girls' Championships last year with Serena Cole, Kevona Davis, Tia Clayton and Tina Clayton dismantling a Penn Relays record - 43.96 - set by another Edwin Allen team in 2017 with Davis on second leg despite being a class 3 athlete at the time.

Dyke notes that a new trend is developing. "Over the past few years, we have been seeing something somewhat different because the class 2s now start to run the 43s," he said.

A Class Two quartet with Davis on the second leg zipped 43.94 seconds at last year's Western Relays and the 2020 class 2 foursome of Cole, Tina, Brandy Hall and Tia has sped home in 43.80 and 43.73, respectively.

Had the 2020 season progressed, Edwin Allen might have improved. "During this period after Champs, I always have time where I can really practise without the large group because preparing for Champs, you'd have all the relay teams, classes 1-4," he said.

Asked for his blueprint, Dyke articulated, "I try to put the best persons, I would say, at the right places on each relay leg which is very important and then we try to maximise through the relay zones and all of that, but sometimes it doesn't happen but leg speed carries us through. I think we have been blessed with some quality sprinters over the past few years and especially when you pool them together going into a Penn Relays, for example, they coordinate well and we get some stunning results."