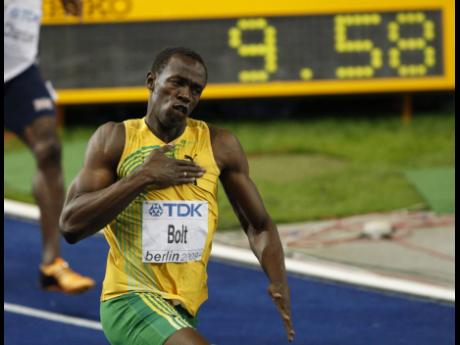 Ten years ago, sprint superstar Usain Bolt strode in Franklin Field to run in the Penn Relays for Jamaica in the USA versus the World showcase. His appearance in the 4x100 metres keyed record attendance and a race for the ages.

At the time, Bolt’s star was the brightest in sport. Not only had he done world record 100/200 doubles at the 2008 Olympics and the 2009 World Championships, but he had also won the hearts of fans everywhere with his charm. However, not every one was convinced and USA anchor leg runner Ivory Williams put up a brave face. “If I’m in front of Usain Bolt, I don’t think he’s going to catch me, to be honest,” said Williams, who ran the final leg for USA Blue.

With a record crowd of over 54,000 roaring with expectation, the USA versus the World 4x100 metre relay came close and the many Jamaicans in the audience saluted their hero every time Bolt did a warm-up sprint.

He and his Racers Track Club teammates represented Jamaica and they didn’t disappoint. Mario Forsythe, Yohan Blake and Marvin Anderson clicked and Bolt got the baton level with Williams, the 2004 World Under-20 100 champion. Bolt zoomed away and Jamaica Gold finished in 37.90 seconds, a Penn record. Bolt’s anchor took just 8.8 seconds and closed the first sub-38 second clocking in Penn history.

“I told the guys to make sure I didn’t have to work, because I really didn’t want to do much. I got the baton pretty much in front, so I wasn’t really worried about anything else,” Bolt said before going on a majestic victory lap.

Along the way, he stopped twice to thrill the fans with his patented ‘To the World’ pose.

For the record, Williams still wasn’t convinced. “I ran a real good fourth leg, but I couldn’t pass him up. I don’t care if it’s Usain Bolt or not, I’m trying to win. When they’re cheering for Usain Bolt, I feel like they’re cheering for me. I knew I wasn’t going to be able to pass him up, but I was trying. I think we really can beat these guys,” he reviewed defiantly after being left 0.43 seconds behind.

A sign of Bolt’s star power appeared when the victory lap ended. Though the 116th staging of the renowned relay carnival had four more hours of action on the agenda, fans left in droves. One estimate placed this exodus at 10,000 patrons. Asked about the mass exit, one fan replied, “Di boss dun run.”