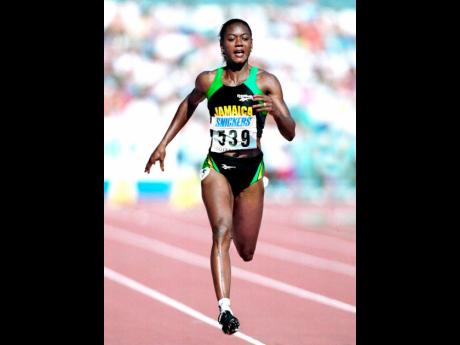 When Merlene Ottey settled into her blocks on April 28, 1985, for the 100 metres at the Mount San Antonio College (Mt Sac) Relays, she was poised to make history, and she did. The slim Ottey cracked the 11- second barrier for Jamaica, opening a portal for many to follow.

Then, just weeks away from her 25th birthday, she set a national record of 10.92 seconds, the first sub-11 run by a Jamaican. The renowned US publication TRACK AND FIELD NEWS was on spot at the Hilmer Lodge Stadium in Walnut, California, and reported, "Merlene Ottey-Page zipped 10.92 in the women's 100, a Jamaican record for the Olympic bronze medallist and the fastest time in the world this year. lt moves the Nebraska alum to 4th among all-time performers."

That was overtaken by Shelly-Ann Fraser Pryce in 2009, when she zoomed 10.73 to win her first World Championship 100-metre gold. In 2012, she rocketed to 10.70 at the National Championships, with Elaine Thompson-Herah matching her MVP teammate at the same meet four years later. Together, they stand as the fourth-fastest women of all time behind the US trio of Florence Griffith-Joyner, Carmelita Jeter and Marion Jones.

Ottey is jointly the seventh fastest of all time.

Together, Ottey, Fraser-Pryce and Veronica Campbell-Brown have the queen's share of Jamaican times under 11 seconds with 66, 53 and 49 trips through the once- formidable barrier. Thompson and Kerron Stewart have done it 30 and 25 times, respectively.

The barrier-breaking 1985 run still has a special place in history. If a Jamaican ran that time now, she would be the eighth-fastest woman from the island.