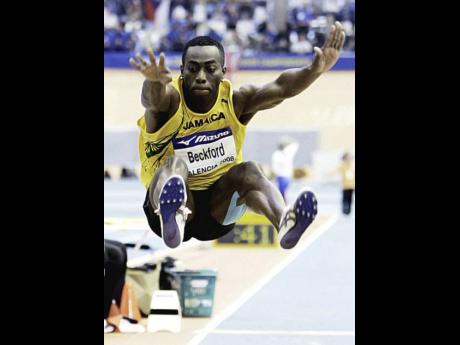 When James Beckford emerged from the triple jump pit on May 20, 1995, he knew he had done something good. What he didn't know is that he had missed the world record by just 5 centimetres or that his huge leap of 17.92 metres would still be in the all-time top 10 a quarter of a century later.

Now 45, Beckford was on a hot streak. He arrived at the Junior College Nationals in Odessa, Texas, having already jumped 17.30. He battered that mark in the first two rounds with jumps of 17.41 and. 17.59. Then he leapt into history just short of the world record held then by American Willie Banks at 17.97 metres.

Speaking on May 19 from his home in Germany, Beckford said: "The following day, they told me that I'd missed that world record by five centimetres. I didn't know at that time because back in the States, they measure in feet but on that particular day, they measured in metres, and I didn't really understand the distance until the next day."

He is still the 8th longest triple jumper of all time but had the conversion from feet to metres been made clear, things might have been different. "I literally jumped out of the pit so I said I don't want to jump anymore," he recalled, "but if I had known, if somebody had just shouted to me, I would have tried a sixth attempt."

Briton Jonathan Edwards broke the 18-metre barrier later in 1995, leaving James to remark: "I saw all these athletes start jumping 17.60, 17.80 so I said it's just a matter of time before people start jumping 18, so I'm very surprised I'm still in the top 10."

The St Ann native did both horizontal jumps at the 1995 World Championship in Goteborg, and his silver medal was the first by a Jamaican at the global level in a field event.

Stunningly, he never triple jumped again. His decision followed a word from the holder of the world record at the long jump press conference. "Mike Powell said to the person, 'James is very talented but if he wants to really stay in the sport a long time, he needs to choose either the long jump or the triple jump' ", Beckford recounted.

That resonated with the Jamaican's own experience. "Whenever I do the triple jump, I always either like twist my ankle or strain my back or something," he said. "If I'm going to last in the sport for a long time, I'm going to choose one; it's painful but I had to choose one."

The man who added silver medals at the 1996 Olympics and the 2003 World Championship has no regrets. "100% right decision because even today I'm still competing in the long jump as a Masters athlete," he affirmed.