Above and Beyond, Wow Wow should lead the way Sunday 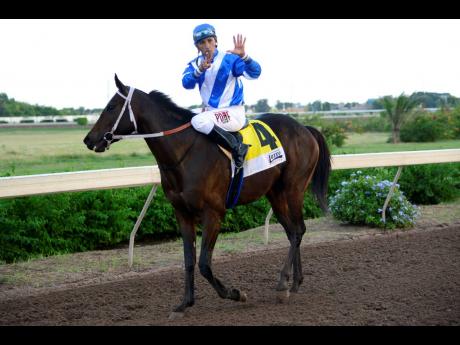 FILLIES' Guineas favourite ABOVE AND BEYOND and the colts' hot shot, WOW WOW, unbeaten in his last nine races, are bankers on Sunday's 10-race card in what will be their final assignments ahead of the season's first classics, set for the weekend of July 25 and 26.

ABOVE AND BEYOND disciplined NIPSTER at a mile in her last start, slamming the Gary Subratie-trainer runner by almost eight lengths in what should be a 1000 Guineas-winning time of 1:39.3.

Though sired by sprint stallion Blue Pepsi Lodge, ABOVE AND BEYOND's dam, Rumble, is a half-sister to last year's Triple Crown winner, SUPREME SOUL (Soul Warrior), and BIGDADDYKOOL (Sorrentino), a Governor's Cup and Superstakes winner, famous for his battles with two-time Horse of the Year, now-retired SHE'S A MANEATER.

Since fitted with a tongue tie by Anthony Nunes, ABOVE AND BEYOND has won back-to-back races in impressive fashion, beating the colt MAHOGANY as a two-year-old, mid-December, before Ian Parsard's runner was gelded and transformed into a monster.

ABOVE AND BEYOND carried 120lb and clocked a fast 1:18.3 at six and a half furlongs to beat MAHOGANY and returned to slam another colt, NIPSTER, on her March 7 three-year-old debut.

Nelson returns aboard ABOVE AND BEYOND at 119lb, renewing rivalry with NIPSTER, who was six pounds heavier when they met but now enjoys an eight-pound swing on the filly. However, NIPSTER looks beaten for class by the filly, leaving lightly raced DOUBLE CROWN as the 'unknown threat'.

Pardard's DOUBLE CROWN is unbeaten in two starts, both this season, winning his races by a combined sixteen and a half lengths. The big chestnut gelding is no slick mover like his stablemate, MAHOGANY, rearing at the gate on debut and leaving the box slowly second time out. However, the Bellamy Road-Salty Talk gelding really flies in the stretch run with loping strides when he gets going.

Though DOUBLE CROWN clocked a pretty fast 1:33.2 at seven and a half for his second victory, the early sectionals, 24.4 and 48.4, might have worked to beat LOOSE BALL by 10 lengths but will be exposed against ABOVE AND BEYOND, who cranked out 23.2 and 45.4 to make all against his stablemate, MAHOGANY, as a two-year-old.

DOUBLE CROWN will be closely watched, especially by Gary Subratie, whose WOW WOW is the 2000 Guineas ante-post favourite, with talks already in the air of a Triple Crown sweep. DOUBLE CROWN's running style will get him into trouble at a mile against the likes of WOW WOW, who routinely cough up sub-1:11.0 six-furlong splits, but he is certainly a horse to watch, going two turns in the September 26 St Leger and October 31 Jamaica Derby.

Meanwhile, WOW WOW is really hard to oppose with 117lb, going six and a half in the night pan. Nunes has summoned a crafty front-running jockey, Andre Martin, who used HOMBRE to steal the 2009 Superstakes, handing him in-form UNIVERSAL BOSS, who is on a hat-trick.

However, WOW WOW is no stranger to pace, warming up at exercise by putting away top-class stablemate SENTIENT in a five-furlong gallop.