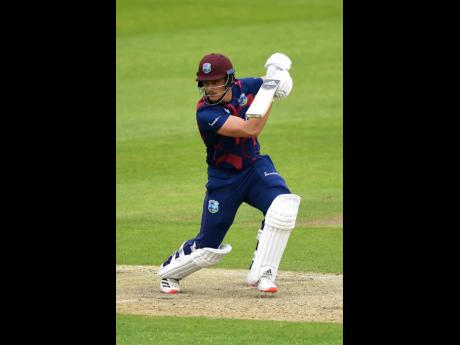 Joshua DaSilva works the ball into the gap to gather runs in a practice match at Old Trafford cricket ground earlier this week.

With scores of three, 15 and one in his previous innings on tour, Blackwood put that dismal form behind him to stroke 43 off 48 balls with seven fours as Holder's XI ended their second innings on 171 for four at Old Trafford.

There was no joy with the bat for Holder, however, managing only two after opening the batting. The knock follows scores of five in the first innings and a first-ball 'duck' in last week's three-day game.

Yet again, the day belonged to reserve batsman Joshua DaSilva, the right-hander top-scoring with an unbeaten 56 to lead his side's batting.

The 22-year-old on Wednesday carved out a superb unbeaten 133 to impress in the Holder's XI first innings.

Reserve fast bowler Anderson Phillip knocked over both openers Shayne Moseley (6) and Holder cheaply to leave the innings tottering on 13 for two.

But Blackwood combined with fellow Jamaican Nkrumah Bonner, who made 47, to repair the damage in a third-wicket stand of 55.

Bonner batted patiently, hitting three fours and a six off 114 balls in 21/2 hours at the crease.

When Blackwood was bowled by part-time off-spinner Roston Chase, DaSilva joined Bonner to post a further 80 for the fourth wicket.

DaSilva faced 83 deliveries in just over an hour and a half, and counted three fours and a six.

Earlier, reserve batsman Kyle Mayers struck an unbeaten 74 as Kraigg Brathwaite's XI were dismissed for 178 in their first innings after resuming the morning on 112 for seven.

The left-handed Mayers, on 40 overnight, continued his counter-attack to hit seven fours and three sixes overall off a mere 56 deliveries.

He inspired a 54-run eighth-wicket stand with tail-ender Keon Harding, who made a busy 22 from 26 balls.

Fast bowler Shannon Gabriel added another wicket to his tally to finish with four for 42, while his new-ball partner Kemar Roach (2-25) and Alzarri Joseph (2-64) ended with two wickets apiece.

West Indies head to Southampton on Friday to finalise preparations for the first Test set to bowl off at the Ageas Bowl next Wednesday.