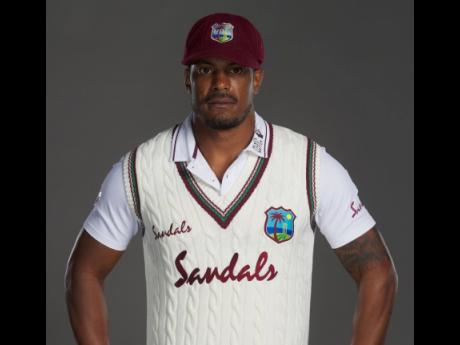 Shannon Gabriel of the West Indies poses for a portrait at Emirates Old Trafford on June 28, 2020, in Manchester, England.

Shannon Gabriel has been added to the West Indies Test squad for the ongoing Sandals Tour of England 2020. The experienced fast bowler was among the reserves and has now been drafted into the 15-member Test squad after proving his fitness following ankle surgery and impressive performances in the two inter-squad warm-up matches at Emirates Old Trafford.

Gabriel, a powerfully built six-footer, has made a full recovery from the ankle surgery. On tour, he has bowled in three innings and grabbed eight wickets for 122 runs. The 32-year-old is one of the most experienced members of the squad. He made his Test debut at Lord's on May 17, 2012, and has so far played 45 matches. He has 133 wickets, placing him at No. 15 on the West Indies all-time list of Test match wicket-takers.

"I am delighted that we can add Shannon to the Test squad. He has shown that he is fit and ready. He will add experience, firepower, and potency to the bowling unit," said Roger Harper, Cricket West Indies lead selector.

In the meantime, the final inter-squad practice game between Jason Holder's XI and Kraigg Brathwaite's XI ended in a draw on Thursday's fourth and final day.

Jamaican middle-order batsmen Jermaine Blackwood and Nkrumah Bonner finally got some runs under their belts as the pair recorded scores of 43 and 47, respectively, for Holder's XI, who reached 171 for four when stumps were drawn.

Wicket-keeper Joshua Da Silva, who hit an unbeaten century in the first innings, was left not out on 56.

Pacer Anderson Phillip took two wickets for 20 runs, while there was a wicket each for Roston Chase and Rahkeem Cornwall.

Earlier, Gabriel picked up four for 42 from eight overs to restrict Brathwaite's XI to 178 all out. Kyle Mayers made an unbeaten 74.