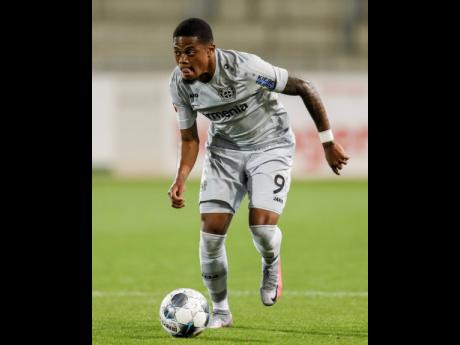 Bayer Leverkusen’s Leon Bailey in action during a German Bundesliga match against hosts Freiburg on May 29.

On the weekend, Liverpool, Manchester City, Manchester United and Everton all sent scouts to assess the Jamaican in the DFK Pokal (German Cup) final against Bayern Munich, which Leverkusen lost 4-2 to the German league winner.

His agent and adoptive father, Craig Butler, admitted there has been a lot of interest in the left-side winger in recent weeks. But he insists they will wait until Leverkusen, who are still involve in the Europa League tournament, has officially end their season before they start looking at or discuss the options on the table.

"We have a lot of opportunities; people are looking and calling. But Leon is focused on his club and his commitment to the club at this time. We can't say what the future holds. But he is focusing on his job and being a professional, and being a professional means that until there is a change, he has to give 100 percent to the club. They have the upcoming Europa (League round-of-16 2nd leg) and he is committed to that," he said.

Leverkusen, who has priced the player between 20 and 30 million Euros, are open to letting him leave this summer and are set to have talks with the Jamaican this week over his future. and Butler says when the times comes they will look to the options.

"Everyone (players) looks at the opportunity to go to England, Spain, Germany or Italy to bigger clubs as something of good value and something one should take pride in. But he (Bailey) has to stay committed, and he is committed in ensuring that the club he is at (now) gets his undisputed loyalty and focus. When he reaches the point where a transfer is imminent, we will take it from there and see what happens.

"I am sure opportunities will arise and when they arise his management team, which I head, will address those opportunities and give them the obvious credence and importance they deserve. Every footballer's dream is to play the highest level they can; and despite the attention Leon always gets, he is always very humble and respectful to the clubs and organisations he has been with.

"It's is important (to wait until after the season), because the same fork that stick sheep, stick goats. So if you are disloyal to the club you are currently at, the new club cannot expect loyalty from you. So we are going to do the right thing by Leverkusen and the right thing by Leon," he continued.

Nevertheless, the outspoken Butler has no doubt the 22-year-old attacker would strive in the league largely considered the best and most competitive in the world.

"No doubt, whatsoever (he will excel in England), England requires dedication, hard work and humility; and Leon is an extremely hard worker, he is extremely dedicated and he has extreme focus, and he wants to be a good ambassador for Jamaica and the youths that follow him," he added.