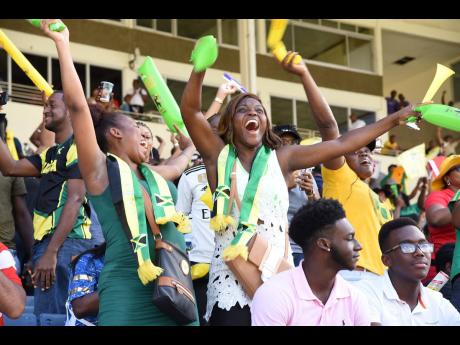 FILE Supporters of the Jamaica Tallawahs celebrate their team’s first win of the 2019 Caribbean Premier League campaign after they defeated the Barbados Trident at Sabina Park on Sunday, September 15, 2019.

The 162-member party, comprising players, officials, and administrators, touched down on Monday to begin the build-up to the tournament, which is set to bowl off from August 18 to September 10.

Under the strict health protocols governing the tournament, the contingent will now undergo a 14-day quarantine at the official hotel while undergoing frequent COVID-19 tests.

"It has been a colossal effort by all involved to get everyone safely into Trinidad and Tobago, and we would like to thank everyone for their hard work and diligence," Hall said.

"Our main priority is the health and well-being of all those involved in CPL, and the wider population in the host country to have got through this first step without any cases is encouraging news, but we will remain vigilant."

The contingent was also tested for COVID-19 prior to departure from their respective jurisdictions and then again on arrival here.

If anyone of the touring party tests positive in the coming days, the person will be removed from the hotel and placed in isolation.

Social distancing will be enforced throughout the tournament, which will be played behind closed doors at the Queen's Park Oval in the capital and the Brian Lara Stadium in Couva, central Trinidad.

Title-holders Barbados Tridents, along with last year's losing finalists, Guyana Amazon Warriors, Trinbago Knight Riders, Jamaica Tallawahs, St Kitts and Nevis Patriots, and St Lucia Zouks will clash over 33 games when the eighth edition of the tournament gets under way.

Amazon Warriors take on TKR in the opening game in Couva.