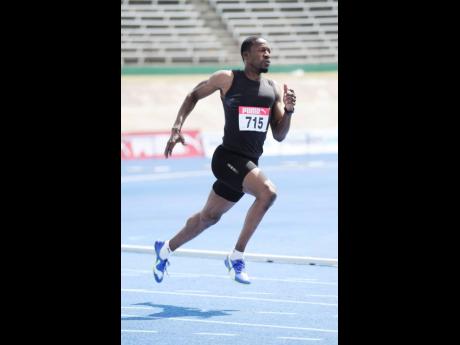 Five-time World Championship medallist Davian Clarke says hand-offs are the key to faster times for the current national 4x400m team. Speaking on the 25th anniversary of Jamaica's first sub-three-minute run in the 4x400m, Clarke said that more races will help today's group to master the baton-passing technique that helped Jamaica to prominence during his career. He also recommended the continued use of a sports psychologist.

Saying that, man for man, the 2016 Olympic and 2019 World Championships silver medallists are faster than the team he ran on, Clarke said, "Michael Blackwood went to Oklahoma, Danny McFarlane and Roxbert Martin went to Oklahoma, so they went to a school that they were taught really good four-by-four techniques, so when we met with the Jamaica team, we were using that Oklahoma hand-off more often than not."

The University of Oklahoma set records indoors during the 1990s, and with McFarlane and Roxbert Martin on its roster, won the 1996 NCAA Indoor crown and the 1997 NCAA Outdoor title.

"So we were coming from a place where we had athletes who were very successful and were taught very well, and their execution was on point," Clarke said.

He thinks the current crop of 400m and 4x400m runners could benefit from a similar programme.

"The guys that we have now, they run but I don't think they run enough four-by-fours to get enough experience to prepare them, and that's why World Athletics introduced the World Relays to give more exposure." Clarke said in the full knowledge that many of the current team ran for Jamaica at the 2018 World Relays.

The record-setting team of Michael McDonald, Gregory Haughton, McFarlane and Clarke campaigned before the World Relays were inaugurated but ran often at the Penn Relays.

"So that's one of the things that is important for our future success. We need more race," Clarke said.

With these improvements, Clarke thinks the national record of 2:56.75 minutes, set at the 1997 Worlds, will be broken.

Now a coach at the University of Texas El Paso, Clarke also attributed the team's success to the presence of psychologist Aggrey Irons at big meets during the heyday of the record holders.

"Dr Irons used to be out there firing me up and he fired up the whole team as well," Clarke said. "He just built it in our heads and we could believe that we could do great things," the 1996 and 2004 Olympic 400 finalist said.

In particular, Irons convinced World Junior 4x400m medallists Haughton, McDonald and Clarke that they could do it against the big opponents.

"We bought into it and believed," Clarke said.

With McDonald, Clarke, Dennis Blake and McFarlane on duty, Jamaica broke the three-minute barrier for the first time on August 13, 1995 with a time of 2:58.29 minutes. With Haughton in for Blake, the team won silver in the final.