Superluminal against DaCosta’s gang of five 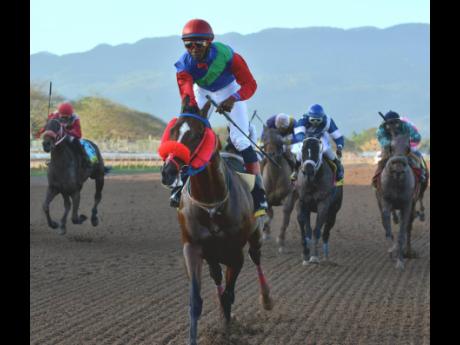 What makes the showdown even more tantalising is the recent defection of six-time riders' champion Omar Walker from 18-time title-holder DaCosta's barn this season, a record-breaking partnership, which has had its ups and downs throughout the years of dominating the jockey and trainers' standings.

DaCosta's five-year-old, MASTER OF HALL, is set to start favourite with journeyman rider, Phillip Parchment, replacing Dane Nelson, who was aboard the gelding when he plodded in a disappointing fifth, at six and a half furlongs, behind upset winner CRYPTOCURRENCY in the mud on August 30.

Parchment is DaCosta's go-to jockey for mounts deemed 'difficult' to handle for others, making him the third rider in as many outings for MASTER OF HALL, who went off as a short-priced 1-5 favourite with Nelson when beaten by CRYPTOCURRENCY.

DaCosta's two big closers, SUMMER SUN and UNCLE FRANK, both have the same problem, being susceptible to being run off their legs by SUPERLUMINAL, a St Leger winner who doesn't know the word quit.

Walker knows SUPERLUMINAL all too well, having been on the receiving and giving ends of the gelding's famous stretch battles. SUPERELUMINAL has beaten top-class opponents such as denying Walker aboard SEEKING MY DREAM in the 2015 St Leger and toppling Diamond Mile-winning WILL IN CHARGE.

SUPERLUMINAL gave a glimpse of his return to form on his third run off the COVID-19 lay-up, carrying topweight 126lb with Walker on September 6, figure eight and cheekpieces refitted, dragging four-year-old SENTIENT around the park at nine furlongs and 25 yards before his sharper and younger rival got the upper hand in the stretch run.

DaCosta's closers, UNCLE FRANK and SUMMER SUN, were among the chasers, which also included UNCLE VINNIE, BIGBANG, CRIMSON and PRINCESS ANNIE. Despite his exertions with topweight, allowing SENTIENT four pounds, SUPERLUMINAL lost second by only three-quarter length to SUMMER SUN.

DaCosta has thrown in ROJORN DE PILOT as a spoiler to test SUPERLUMINAL on the lead. However, ROJORN DI PILOT is an in-and-out sprinter and drawn widest. SUPERLUMINAL, a tactical speedster, should have the rail for himself whenever the mid-race pace quickens.

If Walker gets into the lane clear aboard SUPERLUMINAL, DaCosta's squadron and others will be running or the spoils. SUPERLUMINAL did his first real piece of work, coming off the COVID 19 break, last Saturday morning seven furlongs at 1:30.0, signalling that he will have to be caught.