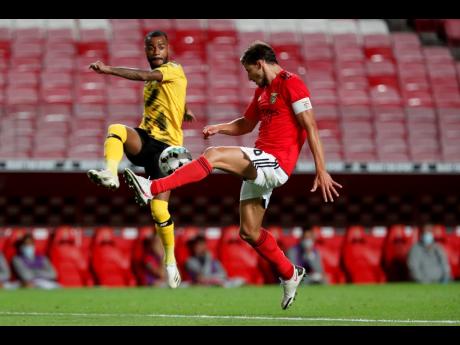 Manchester City completed the signing of centre back Ruben Dias as their third addition of the summer transfer window yesterday.

City did not disclose financial details but Benfica had already announced on Sunday that it was selling Dias to the Premier League club for EU68 million (US$78 million).

"They have been the dominant team in England over the last few years, playing an attacking brand of football which I feel suits my own game," Dias said. "It is really exciting to be part of such a talented squad and to play for a world-class manager like Pep Guardiola, who has a proven track record of developing young players like myself.

"I believe I can improve here, at a club whose ambitions match my own, and I will give everything to be successful and win titles."

Despite signing Nathan Ake for 40 million pounds during the offseason as a backup to left-sided centre back Aymeric Laporte, City remained in the hunt for a right-sided centre half to effectively replace Vincent Kompany, who left the club in 2019.

John Stones and Eric Garcia played in that position in City's two league games so far this season, but both players' futures are uncertain. Garcia has been linked with a return to Barcelona, while Stones was largely frozen out of the team last season.

The 23-year-old Dias, a tall and strong defender comfortable with the ball at his feet, has played 19 times for Portugal. He has established himself as a regular with the national team after being a squad member at the 2018 World Cup in Russia.