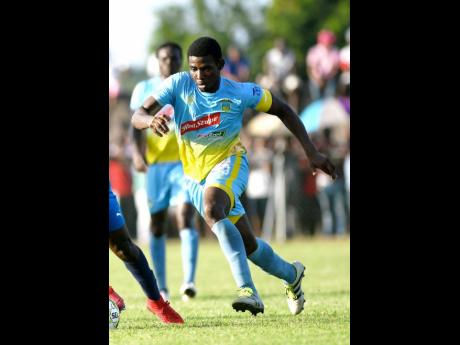 Paul Christie, general manager of Dunbeholden, told STAR Sports that the tough-tackling midfielder has decided to ply his trade for the St Catherine-based club after his contract had expired at Waterhouse.

"Keithy Simpson brings his leadership style, and his play is superior to most players that play in that position in the team," said Christie.

"He is a leader on and off the field because he is a model player, and since he came to the club, he has taken up the mantle to lead and unify the team," he said.

Christie underscored that Simpson, who is a central midfielder player, has been greatly appreciated by the fans and they are looking forward to great things from him.

"The community is elated because they have embraced and accepted the fact that he has chosen to be a part of our community and a part of what we are trying to do," Christie said.

"They (community) is 100 per cent behind this signing because they believed that this is an excellent move to bring in a player of this quality to the club," he said.

"We are trying to get better and we are learning a lot as we enter into this new Premier League season with this new norm, and so we are committed to ensuring that we do all we can to make the club successful," Christie said.

The National Premier League competition is scheduled to kick off on November 14.

The league was scheduled to begin earlier this month, but it has been pushed back because of the COVID-19 pandemic.

Simpson, who joined Waterhouse at the start of the 2017-2018 season, led the club to the final of the Red Stripe Premier League campaign in the 2018-2019 season.

However, they were beaten 1-0 by defending champions Portmore United in the final.

The former Donald Quarrie Manning Cup player has made two appearances for the national senior team in his career.