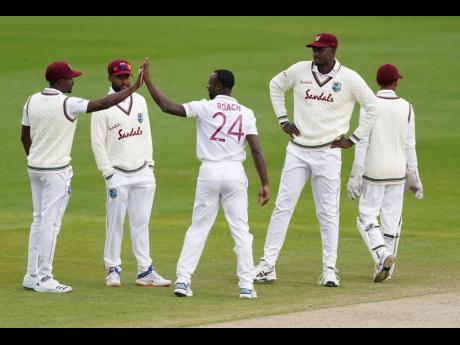 West Indies’ Kemar Roach (center) celebrates with teammates after the dismissal of England’s Jos Buttler during the fourth day of the second cricket Test match between England and West Indies at Old Trafford in Manchester, England, July 19, 2020.

West Indies will tour New Zealand at year end for two Tests and three Twenty20 Internationals, their second series this year following the outbreak of the deadly COVID-19 pandemic.

Cricket West Indies confirmed Monday the Caribbean side would undertake the November 27 to December 15 series after New Zealand Cricket received the thumbs up from government there to host the tour.

New Zealand has been one of the most successful nations in managing the pandemic, with just under 1,500 confirmed infections and 25 deaths, and CWI President Ricky Skerritt said the regional board was happy to undertake the assignment.

"We are pleased to be able to fulfil our obligation to tour New Zealand as we continue to get our ICC Future Tours Programme back on track, in spite of the financial difficulties we face," Skerritt said in a release.

"I want to thank CWI CEO Johnny Grave and Director of Cricket Jimmy Adams, and their operations team, for successfully partnering with NZC to make this tour possible.

"Earlier this summer, in collaboration with the England & Wales Cricket Board (ECB), we restarted international cricket, globally. Fortunately, that England tour included the successful testing of safety protocols which we expect will be the standard for all international cricket tours.

"COVID-19 has created a most challenging period for cricketers and fans alike, with all the schedules being adjusted and amended. We see this tour as another timely opportunity to keep our players working and our fans entertained."

The T20 series will raise the curtain on the tour, with the opener set for Eden Park in Auckland on November 27 and a double-header scheduled for Bay Oval in Mount Maunganui on November 29 and 30.

CWI said the tour was subject to its medical advisory committee approving the final COVID-19 protocols.

West Indies have won just one of their last eight Tests against the Black Caps and have not beaten them at home in 25 years.

Earlier this year, West Indies and England became the first teams to resume international cricket since the global shutdown because of COVID-19, when they clashed in a three-Test biosecure series in the United Kingdom.