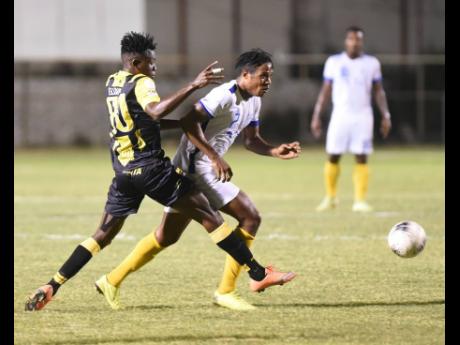 Waterhouse’s Stephen Williams dribbles away from Elliader Dorius of Don Bosco from Haiti in their Concacaf club match at the Anthony Spaulding Sports Complex on February 2.

Waterhouse FC President Donovan White is pleased with the Concacaf League round-of-16 draw for his team as they prepare for their second straight appearance in the competition.

On September 21, the Drewsland-based team learnt if they will face either Haitian club Arcahaie FC or Belizean outfit Verdes FC in their first match on November 5. As a result of their group-stage performance in the FLOW Caribbean Club Championship, Waterhouse were one of the seeded teams into the last 16 and therefore will be a home team.

White told STAR Sports that not having to travel will be an added benefit, given the complications of the c pandemic which has affected the football calendar.

"Given that there is a pandemic, it beats travelling at this point in time, so we are first of all happy that we played hard enough in the preliminary round to earn a seeded spot for the round of 16," White said. "We feel that draw between either the team from Haiti or the team from Belize is a favourable draw for us. And we are going to prepare for whichever it is, and we are going to go into the encounter with the mindset and attitude to win the game."

The Caribbean Club Championship was cancelled at the semi-final stage because of the pandemic, which resulted in the revised format.

Waterhouse advanced to the quarter-final stage of the competition last year, but were beaten by eventual finalists Montagua of Honduras.

White says that the team has the drive for a deeper run this time around.

"We intend to progress all the way to the finals this year. That is certainly our ambition, and we are going to work towards it," he said.

The round of 16 will be a one-off match, while the two-legged aggregate goal series will take place from the quarter-finals all the way to the finals, which are scheduled for January 2021.

The winners of the Concacaf League will qualify for the 2021 Concacaf Champions League along with the five next best teams. The preliminary rounds are scheduled to begin on October 20.