Chrisann Gordon-Powell healthy and focused on next year 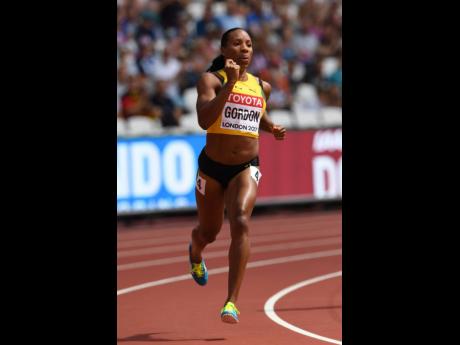 The last time local track and field fans saw Chrisann Gordon-Powell, an untimely injury had felled her at the National Senior Championships in 2019. Gordon-Powell is healthy now and is looking ahead to 2021 and the rescheduled Olympic Games in Tokyo, Japan.

A chancy hamstring gave way in the National 400 metre semi-finals and separated her from a World Championship team she seemed certain to make. "It felt tight and I felt a pulling sensation in my leg," she recalled in an interview a year after watching the Doha World Championships on television.

The former Holmwood Technical High standout had come to the Nationals as the season's fastest Jamaican after a run in May timed at 50.66 seconds. "I was expecting to be in the top three but that didn't happen," she reflected.

As consolation, Gordon-Powell ended the 2019 campaign as the second fastest Jamaican over 400 metres.

Instead of continuing a run that had taken her to the 2015 and 2017 World Championships and the 2016 Olympics, Gordon-Powell had to watch. "It was a very, very difficult time. I was in disbelief," she said, recalling her disappointment. Nevertheless, she enjoyed the performances of her teammates who garnered medals in the 400 - for Jackson - and in both 4x400 relays. "I sat down and watched the races because I had friends competing so you know, so I wanted to support them," she recalled.

"I'm young so I have a lot of opportunities. It's a part of the game, we've all been through it, all the athletes," she resolved.

Thankfully, the injury is behind her now and her fitness confidence has been boosted by races this year over 200, 300 and 400 metres."Yes, I'm back 100 per cent", she said with a quiet tone of relief. "In April, training was going extremely well but with the virus, they closed the track, they closed the gym, so everything slowed down," she added.

Keeping fit is her top priority now and she has her eyes on progressing beyond her personal best of 50.13 seconds. It was set in a bright 2017 season where she won the NCAA Championships title for the University of Texas. "I know I have the ability to go under 50 seconds. When I ran that 50.1, I could have run 49 at Trials. I should have saved some more energy for the final", she envisioned as her mind distilled the competitive lesson gleaned at the 2017 Nationals.

"I think I can run 49 seconds. I believe that," she said. Given the quality of her training setup, that goal may well be within reach as her workouts are supervised in Florida by noted coach Gary Evans. Among his athletes is the Bahamian star 400 metre runner Steven Gardiner, the 2019 men's World champion.

All things being equal, the next time Jamaican fans see Gordon-Powell in action, the outcome should be much better.