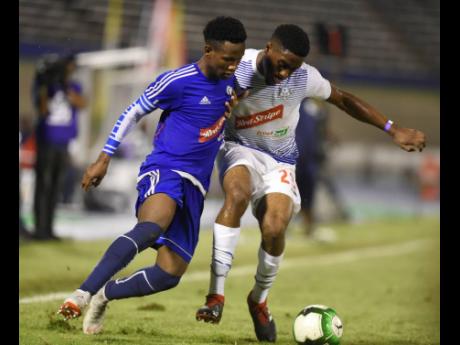 Mount Pleasant’s Cardel Benbow (left) and Emelio Rousseau of Portmore United in a tussle for the ball in a semi-final of the National Premier League on April 15, 2019.

With the National Premier League scheduled to begin on November 14, David Galloway, manager of Mount Pleasant Academy, says his players are ready and raring to go ahead of the start of the new season.

The St Ann-based Mount Pleasant, semi-finalists in the 2018-2019 season, are viewed as one of the favourites for this year's title.

The Paul 'Tegat' Davis-coached team has acquired the services of midfielder Ashani Ricketts, while it has released the trio of Jermy Nelson, Brian Brown, and Shaquille Notice.

The 2019-2020 Red Stripe Premier League season was ruled null and void by the Jamaica Football Federation (JFF) in May because of a surge in COVID-19 cases in Jamaica.

Galloway told STAR Sports that it has been over six months since they have played a competitive match, and therefore, his players are very anxious to return to the field of play.

"They are all conforming and watching and hoping that come the 14th of next month, we will have a kick-off of the Premier League because this is what we have been training for, and we are looking forward to that," he said.

Galloway underscored that the players have been following the rules and protocols that have been put in place by the club and the JFF.

"We have been sticking to what they are saying because they say 15 persons per protocol (training), and we split the team into two and do what we have to do out there," Galloway said.

"The team is the same team from the previous season, and so all we have to do is to concentrate on playing some football and do much better than what we did the last time, and hoping that we don't have a next pandemic because we are hungry for some football," he said.