Bailey marks return from int’l with a goal 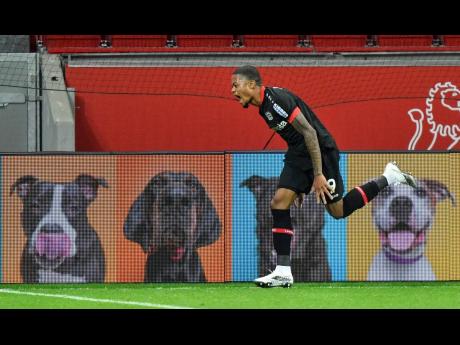 National striker Leon Bailey picked up where he left off before the international break scoring his second consecutive Bundesliga goal in Bayer Leverkusen's 2-1 win over Arminia Bielefeld on Saturday at the Schuco Arena.

The 23-year-old Bailey participated in Jamaica's two-game international series against Saudi Arabia recently, which included starting in the 2-1-win last Tuesday. He returned to Germany in time for him to make his fourth consecutive league start.

Bailey opened the scoring in the 27th minute, combining with Florian Witz to smash the ball into the top corner. Leverkusen headed into the half-time break with the lead, but the scores were level two minutes into the second half, thanks to a goalkeeper error from Leverkusen shot stopper Lukas Hradecky. Defender Daley Sinkgraven passed the ball back to Hradecky, but the goalkeeper mistimed his attempt to clear the ball and it rolled into the net to gift Bielefeld an unlikely equalizer.

Leverkusen pressed forward trying to restore their lead and, in the 49th minute, Bailey was nearly involved in getting the second goal. After managing to advance down the ride-hand side, his pass found in-form striker Lucas Alario but hit the side netting.

They should have taken the lead in the 86th minute, but nobody could get on the end of Patrick Schick's low cross. However, they would find the winner a minute later when substitute Mitchell Weiser' shot was initially saved by Bielefeld goalkeeper Stefan Ortega Moreno, but the rebound fell to Aleksander Dragovic, who fired the ball into the net for his first goal of the season.

It is Leverkusen's fifth straight league win and the result moves them to third place in the league table with 18 points, the same as Borussia Dortmund. However, they are in second place with a better goal difference (+13). Leverkusen are one point away from leaders Bayern Munich, who drew 1-1 with Werder Bremen. They host Hertha Berlin on Sunday with the knowledge that they could end the month of November top of the league should they win that game and other results go their way.