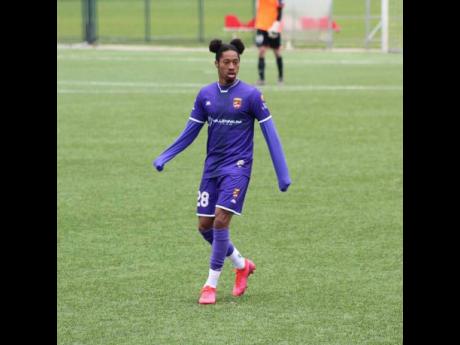 Former Jamaica College and current Harbour View FC player Norman 'Weedy' Campbell is on cloud nine at the moment as the attacking player was in scintillating form on the weekend for his on-loan Serbian Club RFK Graficar Beograd in the PRVA Liga.

In his first start for the club, Campbell netted his team's second goal in the 28th minute then set up two others as Graficar ran out 5-1 winner over Sloga, which propelled Graficar to third in the Second Division table, following their eighth victory of the campaign.

The 20-year-old could not hold back his elation and took to social media to share his excitement on his recent performance.

"Very happy to have scored a goal and recorded two assists on my fist start with Graficar. It was a strong performance from everyone to secure three points," wrote Campbell on his Instagram page.

Since arriving in Serbia, Campbell seems to have been the lucky charm for his adopted club as his two substitute appearances have resulted in victories for his team.

His scintillating performances over the last couple of weeks have capped off what is an excellent recent run of form for Campbell, who recently returned from International duties, where he debuted for the Reggae Boyz in their two-match friendly against Saudi Arabia.

Campbell was a surprise starter for the Reggae Boyz in the games, where he played 45 minutes in the first encounter and 62 minutes in game number two, which the Boyz went on to win 2-1.

For Campbell, it was a dream come true, and the sky is the limit for the attacking player, who wrote: "Talent unlocks the door and skill opens it. Hard work keeps it from slamming in your face and that you should never give up."

Campbell and his Serbian outfit are in action again this Sunday when they take on Radnicki Sir Mitrovica.