Refs must do better – Speid 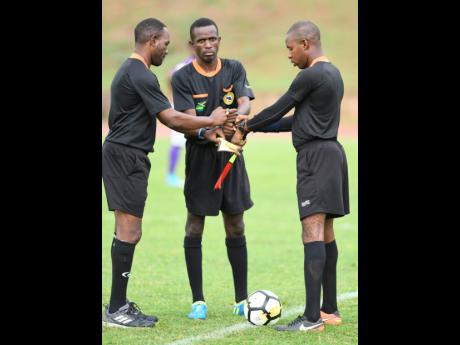 File Photos Referees converge on the touchline at the Stadium East field before a Manning Cup match in 2018.

In an effort to improve the standard of the National Premier League, chairman of the Jamaica Football Federation (JFF) technical committee, Rudolph Speid, said his organisation has engaged the Jamaica Referees Association about ways that they can better officiate games.

In recent times, the local referees have been heavily criticized by fans and coaches over their poor handling of matches across the country.

Speid said that in order for the standard of the game to improve locally, referees must improve their craft to international standard in a bid to make the game a lot more attractive for the fans.

"We found that players were trying to play the same way overseas like how they play here and they were getting cards, red cards, yellow cards and it was costing them the game," he said.

"We have spoken to the referees and they were actually going around with us and talking about the importance of good referees," Speid.

He added: "But it is the standard of the refereeing that needs to be consistent with international standards and that point was made to the referee body this year and it is a pity that we haven't started playing again, but we hope to see those improvements."

Speid, who is the sporting director of Premier League outfit Cavalier, underscored that he is confident that once the referees step up their game then he expects that the players will also do the same things and therefore he expects the level of football to improve significantly.

"I think that once the standard is the same throughout the world then it will make the players understand at what level they are supposed to play and so that will help with the problem of improving our football all round," Speid said.

In the meantime, veteran player Newton Sterling agrees with Speid and said that more education is needed for the players in order for them to carry out their functions much better on the field.

"The refereeing needs to be better and we need to educate the players more about the game itself," said Sterling.

"We used to have those schools (coaching schools) a few years ago where the JFF and Red Stripe went around and educate the players, about how to do an interview and how to conduct themselves on the field and so I think more of that needs to be done with the players," he said.