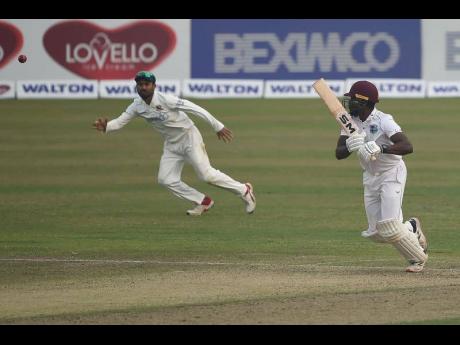 Windies middle-order batsman Nkrumah Bonner plays a shot in his opening innings of the second Test match against hosts Bangladesh in Dhaka on February 11.

Former national cricket Nehemiah Perry says that national and West Indies middle-order batsman Nkrumah Bonner's performances in the Test series against Bangladesh is a credit to his consistent hard work and taking advantage of his opportunity.

The 32-year-old Bonner was named Man of the Series in the West Indies 2-0 win over Bangladesh, having scored the second-highest total runs in the series with 231.

Bonner was a part of a reshaped team that was missing some of its key players, such as captain Jason Holder and several others who withdrew from the tour, the majority citing COVID-19 concerns. Perry credited Bonner's persistence and hard work in taking advantage of a rare opportunity with the team.

"He has a very calm head. I know that Bonner [has] put in the work. I went by St Catherine one day and I saw him batting away on a Sunday, I think it was. And he was there batting away in the nets," Perry told STAR Sports. "He has put in some work. I think that Bonner, over the years, when you look at him (his play), is easy on the eyes but he needs to hold his calmness, continue to [be] calm when things are happening."

Bonner came through in the second innings of the first Test, where his knock of 86, combined with fellow test debutant Kyle Mayers double century, helped the West Indies to victory, as well as posting a score of 90 in the first innings of the second Test. Perry said that the challenge for Bonner now is to continue to stay motivated as West Indies selectors face difficult decisions ahead of their first home series against Sri Lanka, starting next month.

"I thought he gave away, I would think, two centuries. He would have two Test centuries back-to-back. But it's just one of those days. But you can't ask for more than that-- for your first two Test matches you have two big half centuries," Perry said. "It's a good start. It's something to build on now, but it's not to get carried away with. What you want to do now is come back and continue to work [hard]."

Sri Lanka's tour of the Caribbean will mark the return of international cricket to the region since the pandemic. All matches will be played in Antigua in a biosecure environment and will consist of three T20s, three One-Day Internationals and two Test matches.