Catch Patriarch if you can! 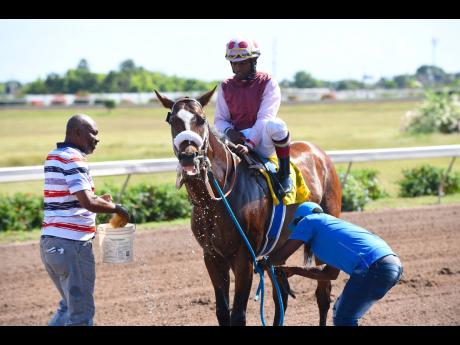 FILE Patriarch, ridden by Dane Nelson, is cooled down by his handlers after cantering to an easy victory in the second race at Caymanas Park on Saturday, January 4, 2020.

PATRIARCH is too light at 114lb not to be given every chance of going all the way in Saturday's open allowance/graded stakes sprint at five and a half furlongs after leading TOONA CILIATA and company to the furlong pole three weeks ago at six and a half.

Carrying 118lb with Dick Cardenas, PATRIARCH, the country's speediest backstretch runner, straightened two and a half lengths clear of another lightning-fast sort, ENGLAND'S ROSE, zipping splits of 22.4, 33.4, 45.4 and 57.4 to the last red pole before the cavalry charge started inside the final furlong.

Returning at five and a half, the distance at which he won back-to-back races, beating open allowance company last August and September, a sound PATRIARCH will be hard to collar with the lightweight, getting 12lb from GOD OF LOVE and six from TREVOR'S CHOICE, whose connections added two pounds for Shane Ellis' services at 120lb.

TREVOR'S CHOICE makes his seasonal debut after rallying to get the better of PEKING CRUZ in the Christopher Armond Sprint Trophy at five and a half furlongs on December 27, headed off entering the straight, but fought back inside the last furlong to regain the lead before holding off CHACE THE GREAT's late surge by a half-length.

It should be noted that PATRIARCH was in the December 27 line-up but was returning off a three-month lay-up, with sparingly used Nicholas Hibbert, and ran one of his worst races ever, failing to raise a gallop in finishing next-to-last.

A sweet mover at exercise, TREVOR'S CHOICE has been peppering the track with bullet gallops since the start of February, a warning that he's sound and ready for battle. However, giving up six pounds to PATRIARCH, who he will have to chase, puts TREVOR'S CHOICE in a tough spot.

Should Ellis engage PATRIARCH in what is sure to be torrid splits, GOD OF LOVE will only be too happy to clean up the debris inside the final half-furlong. Trainer Fitzgerald Richards has put his rivals in a quandary, catch PATRIARCH if you cam, but at risk at being nabbed by GOD OF LOVE.