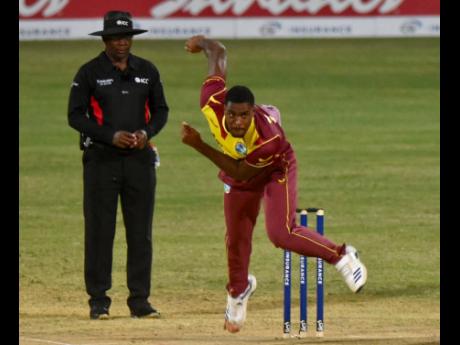 Obed McCoy bowls a delivery as he put together a spell of two wickets for 25 runs against Sri Lanka in the first T20I yesterday. 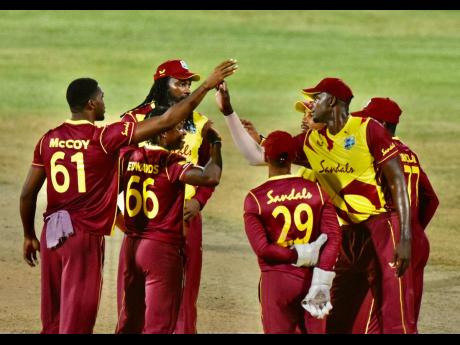 West Indies players huddle as they celebrate taking a wicket against Sri Lanka in the first match of the T20I series yesterday.
1
2

It was an enthralling game filled with sixes, hat-tricks and wickets, however, the home side West Indies came away with a four-wicket win over Sri Lanka in the first T20 International at the Coolidge Cricket Ground in Antigua, to take a one-nil lead in the three-match series last night.

Chasing a modest total of 132 to win, the West Indies made a meal of the total, losing six wickets, however, they eventually got over the line, thanks to an unbeaten 29 from Jason Holder, who ended the game with the 13th six of the innings.

Captain Kieron Pollard, who made 38 off 11 balls, also made his presence felt, hitting spinner Akila Dananjaya for six sixes in the sixth over, to become the second player in T20 internationals to do so, and the third batsman in international cricket to achieve the feat.

Dananjaya had earlier put the West Indies run chase into a tailspin when he picked up the hat-trick wickets of Evin Lewis for 28, Chris Gayle and Nicholas Pooran for nought.

Lewis and Lendl Simmons, 26, had earlier given the West Indies a tremendous start, putting on a whirlwind 52 runs in 3.2 overs for the first wicket. Spinner PWH De Silva weighed in with three wickets for 12 runs.

Earlier, seamer Obed McCoy led the wicket-taking for the efficient West Indies bowlers, who restricted the Sri Lankans to 131 for nine in 20 overs.

McCoy bagged two for 25 while there was a wicket each for debutant spinner Kevin Sinclair, Dwayne Bravo, Fidel Edwards, Jason Holder and Fabian Allen.

Number three batsman Pathum Nissanka top-scored for the visitors with 39, while opener Niroshan Dickwella made 33 in a 51-run second-wicket partnership.

Captain Pollard praised the efforts of his team for getting over the line in a kamikaze run chase.

"Kudos to the bowling line-up for restricting them to 132. We started off pretty well and faltered in the middle with the hat-trick coming there. But we backed ourselves. If hitting sixes is our strength, we want to capitalise on our strengths. The series is going to be their spinners against our batters. We're not going to hide from that reality, "said Pollard.

The teams will face off with each other on Friday in the second match of the series at the same venue.