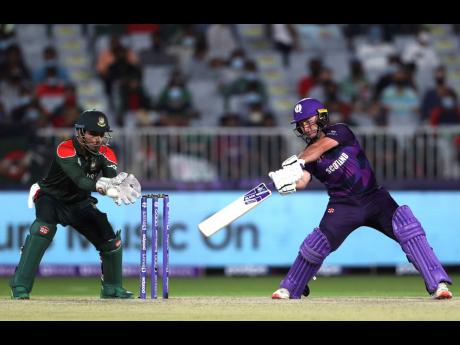 Scotland's batsman Chris Greaves (right) plays a shot as Bangladesh's wicketkeeper Nurul Hasan looks on during the Twenty20 World Cup first round match between Bangladesh and Scotland in Muscat, Oman on Sunday, October 17.

Chris Greaves enjoyed the performance of a lifetime as he inspired Scotland to a shock six-run victory over Bangladesh, while Oman took a comprehensive 10-wicket win over Papua New Guinea (PNG) in the opening matches of the ICC Men's T20 World Cup 2021 on Sunday.

The Oman-Papua New Guinea match up started off the highly-anticipated tournament in which West Indies are two-time defending champions.

The tournament co-hosts, winning the toss, opted to bowl first. PNG captain Assad Vala led by example with 56 from 43 balls but saw his side beaten heavily in their first-ever T20 World Cup match.

The debutants, who are ranked three places higher in the ICC Men's T20I Team Rankings, were dismissed for 129/9.

Jatinder Singh was the chief aggressor in Oman's run chase, clearing the ropes four times, ending unbeaten on 73 with Aqib Ilyas reaching his own half-century in the closing stages.

But skipper Zeeshan Maqsood was named Player of the Match on the strength of a crucial spell of left-arm spin, that started with him conceding 11 runs in his first over.

He was not required to bat as Oman chased down their target of 130 without losing a wicket.

But with the toughest test of their first-round campaign next up against Bangladesh, at Al Amerat on Tuesday, Maqsood said his side still needs to step up.

"We have to look at our fielding, and minimise our mistakes, so we admit that and come back strong," said the 33-year-old. "We always use many bowling options, so that's a good thing for us. Our catching is alright, but ground fielding has to be better due to nerves. We can't take it easy and we need to correct our mistakes."

Meantime, in the second match of the tournament, all-rounder Greaves, in just his second T20 international, hit 45 off 28 deliveries to salvage Scotland's innings before taking two crucial wickets.

Bangladesh, favourites to emerge from Group B into the Super 12s, opted to bowl first, and reached 134/7 in their 20 overs.

At one point, Scotland were reduced to 53 for six and Bangladesh looked to be in total control, but then Greaves combined with Mark Watt to put on 51 and get things back on track for the Scots who ended on 140/9.

West Indies play the first game in their campaign for a third T20 World Cup win and a US$1.6 million prize, on October 23 in Dubai, against England.