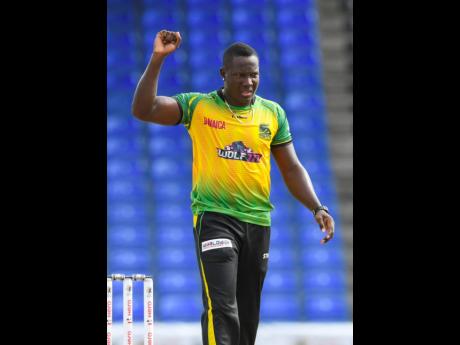 Rovman Powell warmed up for West Indies' series against Pakistan starting next week with an explosive knock but his efforts proved in vain as Kandy Warriors slumped to 20-run defeat to Dambulla Giants in their opening game of the Lanka Premier League yesterday.

In pursuit of a challenging 191 at the R Premadasa Stadium, Warriors found themselves tottering on 88 for six in the 13th over, with West Indies batsman Devon Thomas (two) and Jamaican Kennar Lewis (17) both perishing cheaply.

Arriving at number six with Warriors in deep trouble, the right-handed Powell launched a brutal assault, hammering a four and four sixes in 42 off 21 balls, to rally the innings.

He put on 40 for the seventh wicket with Ishan Jayaratne (18) before falling at the start of the 17th over with 63 runs required from 24 balls, miscuing a slower ball from new-ball seamer Nuwan Pradeep (3-31) to mid off.

Jamaican Powell, along with Thomas, were late call-ups to the West Indies side following injury to captain Kieron Pollard which has ruled him out of the series.

Jayaratne added a further 31 for the eighth wicket with Sachindu Colombage, who lashed an unbeaten 27 from 16 balls, before the innings subsided to 170 for eight.

Off-spinner Ramesh Mendis, who starred in the recent Test series against West Indies, finished with three for 21 from his four overs.

Earlier, Powell had proved perhaps the most economical bowler with one for 12 from his two overs of medium pace as Giants, choosing to bat first, tallied 190 for seven off their 20 overs.

Englishman Phil Salt slammed 64 from 27 balls, lashing four fours and five sixes in a rollicking 97-run, opening stand with Niroshan Dickwella who made 37 from 23 balls.

Salt was one of three wickets to tumble for 23 runs off 17 balls but Dasun Shanaka struck 24 off 18 deliveries to steady the innings before Mendis provided a dashing 11-ball unbeaten 22 towards the end.

In the other game of the doubleheader at the venue, out-of-favour West Indies batsman Sherfane Rutherford failed with ten but his Colombo Stars beat Galle Gladiators by four wickets.