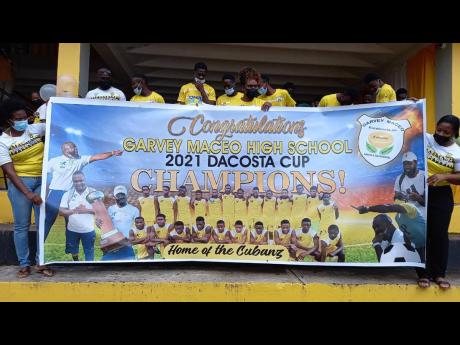 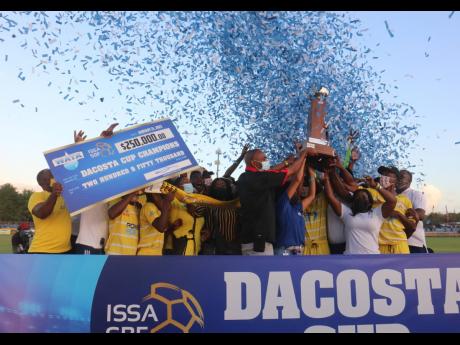 Garvey Maceo celebrate after beating their opponents Manning’s School at the ISSA/WATA daCosta Cup final at the STETHS Sports Complex on Friday. 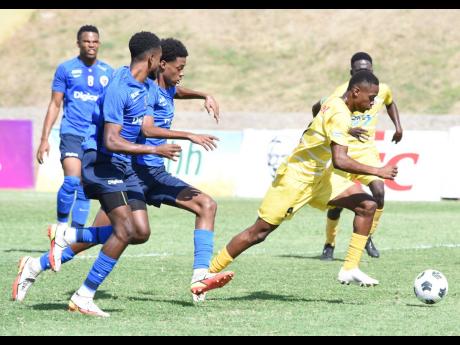 "I've done a lot of great things in football, but this one is on top of the list," said an enthused Merron Gordon, coach of the Clarendon-based Garvey Maceo High School ISSA/WATA daCosta Cup team.

Gordon was speaking during the celebrations held at the school yesterday, as they revelled in their school's second title since 2007.

Shouts of "Cubanz" emanated from the school grounds, with ear-piercing sounds from vuvuzelas.

The school's nickname relates to Antonio Maceo, a general in Cuba's Independence Army, whom it was partially named after.

"This is something every schoolboy football coach on the island really wants to win, and I'm happy the Garvey Maceo family could win this year," Gordon said.

Gordon described his team as a disciplined group, saying that the boys are doing well academically and in sports. He boasted that three of his four final year students have matriculated into university, with captain and top goalscorer Gregory Cousins copping a full scholarship in the US.

Gordon said Cousins, who scored a hattrick in the final, missed the celebration, having started classes at the Bethel University campus in the United States. Gordon says he will be dearly missed by the team when they battle newly crowned ISSA/Digicel Manning Cup champions Kingston College for the ISSA Olivier Shield trophy on Saturday.

"Gregory Cousins is an extra player," Gordon said. "He's a really good goalscorer, but we will be going out there together with our team and playing together as a team, and, hopefully, we can get the results."

Speaking of future plans, Gordon said, "Next year we are going to be a very good team also. We're gonna defend our title with everything we got, and when you're winners, you attract sponsorship and good under-14 players to continue building our programme for years to come.

"Clarendon is always a strong football parish. Every year, a Clarendon school is always in the top four or top eight, so it is no surprise to me that [Clarendon schools have won] three major titles so far, and we're going for a fourth," Gordon said in reference to the ISSA Olivier Shield. "We are going there to represent the rural area, and represent well."