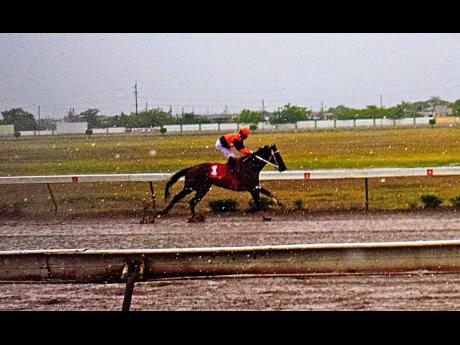 EROY easily won Sunday's Hubert Bartley Memorial Trophy by twelve and a quarter lengths with Dick Cardenas, handing the Panamanian his second winner on the 10-race card after going all the way with 5-2 chance SNIPER MAN in the sixth event at five furlongs straight.

Sent off as the overwhelming 3-5 favourite, down-in-class EROY had things his way on the lead, breaking smartly from post-position one, never to be headed until pulling up at the clubhouse turn after clocking 1:31.0.

EROY, who returned off a six-month lay-up on May 28, finishing third behind fellow American, DOUBLE DIVA, who he allowed 14lb, proved he was way better than overnight-allowance company, bettering the 1:31.3 he posted when beating FURTHER AND BEYOND in an open-allowance race in November.

MINIATURE MAN, the 9-5 second choice, was hopelessly outsped in splits of 23.4, 46.2 and 1:10.3, improving into second approaching the furlong pole while Cardenas was already easing down EROY.

Gary Griffiths saddled two winners, EDDIETWENTYNINE in the fourth and LETTERS IN GOLD in the eighth. EDDIETWENTYNINE was too quick for his fellow three-year-old maidens at five furlongs straight with Reyan Lewis. However, Hakeem Pottinger had to wait until the last hop for LETTERSINGOLD to nail JAHSENDBLESSINGS at the wire going five furlongs round in the eighth event.

The mandatory Reggae 6 payout, which opened with a carryover of $9.7 million, returned $73,754 to winning tickets with one upsetter, SUBBIE at 13-1, and three winning favourites - BLUE SEAS at 1-2 in the second event, even-money EDDIETWENTYNINE and GREAT WAYNE at 4-5 in the fifth.

The Twilight 6, which had a $3.3 million carryover from outsider-riddled Saturday, yielded far better returns at $126,497 with Anthony Nunes' MINIDEVAK striking at 10-1 in the seventh for three-year-old maidens, holding off Gary Subratie's late-charging LOVE DUB at seven furlongs.