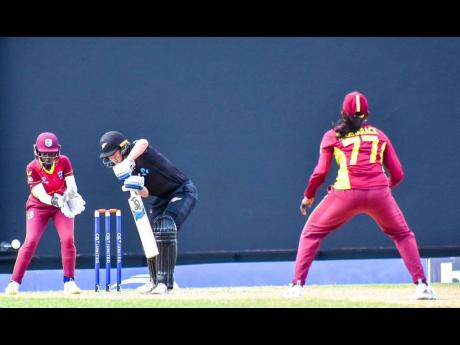 New Zealand’s Maddy Green (centre) plays to the offside during her player-of-the-match performance, while being watched by West Indies’ wicketkeeper Rashada Williams (left) and bowler Karishma Ramharack during their second one-day international (ODI) at the Sir Vivian Richards Stadium in Antigua yesterday. New Zealand won the match to win the series.

West Indies Women once again failed to put enough runs on the board to seriously challenge New Zealand, as the visitors secured a two-wicket win in the second one-day international (ODI) at the Sir Vivian Richards Stadium to capture the series with one game to play.

Getting to 169 for nine in their allotted 50 overs, Windies managed to pick up eight New Zealand wickets, however, the visitors would eventually get to 171 for eight in 40.1 overs.

The hosts lost two wickets with the score on 29, as ShabikaGajnabi and Jamaican Rashada Williams made seven and 13, respectively.

Former captain Stafanie Taylor and present skipper Hayley Matthews put together a brief 38-run fourth-wicket partnership before Taylor was caught behind for 10 off 39 balls and Kyshona Knight went back for one at 68 for five in the 25th over.

Matthews and another Jamaican, Chinelle Henry, added 47 runs for the sixth wicket, before Matthews on 46, became the first of three wickets for Eden Carson.

Matthews faced 82 balls and hit just two fours, however, Henry continued her hot streak with the bat, as she hit five boundaries in her knock of 30 from 35 balls before she fell to Carson.

Some lower order resistance from Afy Fletcher 19 and Shakera Selman 18 helped West Indies to 169 for nine.

New Zealand quickly put up 22 runs on the board before seamer Selman struck twice by removing captain Sophie Devine for seven in the fifth over and had Suzie Bates caught by McLean for 16 at 32 for two.

Henry picked up the wicket of Amelia Kerr for 21, at 51 for three and West Indies had their tails up, but Maddy Green and Lauren Down shared in a 66-run fourth-wicket partnership that took the visitors over the 100-run mark.