Tallawahs too hot for Kings 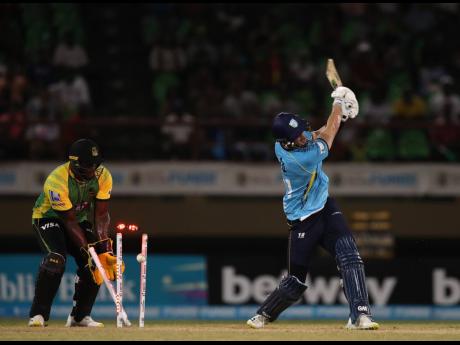 The Jamaica Tallawahs, on the back of their spinners, booked their place in qualifier two of the Caribbean Premier League, following a 33-run win over the St Lucia Kings in their eliminator encounter at the Providence Stadium in Guyana.

After clawing their way to 148 for eight in their allotted 20 overs, the Tallawahs were able to stifle the Kings' batting and restricted them to 115 all out in 18 overs.

That restriction was led by the Tallawahs spin trio of Mohammad Nabi, Imad Wasim and Fabian Allen, who took eight wickets between them to blow through the Kings line-up.

After sending the Tallawahs into bat, the Kings may have felt that their decision was justified having the Jamaican franchise in a tizzy at 115 for eight in the 18th over.

It took a resilient knock of 31 from 15 balls from Nabi to spruce up the Tallawah's score, as the Afghanistan T20 captain hit four sixes, as the Tallawahs got more than 30 runs in the last two overs.

Shamarh Brooks would not be undone, as his 47 from 31 balls with a boundary and four sixes, set things up for the frantic finish. Raymon Reifer chipped in with 25 from 23 balls.

The Tallawahs knew that wickets were their only hope to restrict the powerful Kings' batting line-up, and they got that good start when Mohammad Amir knocked over the tournament's leading run-scorer Johnson Charles for just three, with only 10 runs on the board.

Skipper Faf du Plessis kept the Kings in the game with a knock of 41 from 26 balls with four fours and two sixes, but when he departed in the eighth over, the Kings were in trouble at 61 for four.

Tallawahs captain Powell then unleashed his barrage of spinners on the rest of the Kings batters and they folded for 118.

Adam Hose tried to put up some resistance with 18 along with Alzzari Joseph who made an unbeaten 28, as Allen and Nabi finished with three wickets each with Wasim and Mohammad Amir picking up two each.

Captain Rovman Powell was overjoyed at the way his troops defended a respectable score under lights at Providence.

"It's a very important night, a lot of credit must be given to the boys. The way how Nabi finished the innings was fantastic and the way how the guys stuck in was tremendous."

The Tallawahs will now face the Guyana Amazon Warriors today in qualifier two for a place in the final starting at 6 p.m. Jamaica time.

The Barbados Royals stormed into the final after their 87-run drubbing of the Amazon Warriors in the first qualifier of the play-offs yesterday.