Reggae Girl on target in England 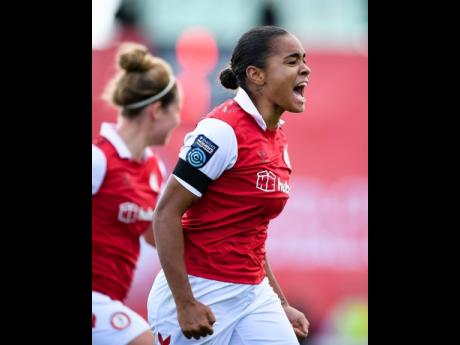 Reggae Girl Shania Hayles struck in the first half to earn title-seeking Bristol City a 1-1 draw at Durham in the second-tier English FA Women's Championship, but her more illustrious Jamaica teammates Khadija Shaw and Drew Spence both drew a blank in the top flight on Sunday.

The visitors went in front on 22 minutes when 22-year-old forward Hayles pounced on a slack Ellie Christon header and rounded the goalkeeper to score.

But Rio Hardy's fourth goal in two league games cancelled out Hayles' opener to ensure the points were shared in bitterly cold conditions at Maiden Castle.

Goalkeeper Fran Bentley experienced a bittersweet afternoon for City as the Robins number one saved a penalty to secure her side the point, but was left frustrated as they missed the chance to move top of the Championship.

City lie one point behind leaders London City Lionesses with a game in hand.

"I'm happy personally with the penalty save, but I think there's a lot that we need to take from this game," Bentley said after Sunday's match.

"We knew it was going to be a hard place to come to, but we can take more into the second half of the season.

Striker Shaw failed to add to her eight league goals in eight appearances, but Manchester City still romped to a 3-1 win over strugglers Brighton & Hove Albion in the FA Women's Super League to move to within three points of Manchester United and Arsenal in second and third place.

Midfielder Spence came close to scoring for seventh-place Tottenham Hotspur, but was thwarted by goalkeeper Jacqueline Burns as the visitors went down 1-0 at Reading.