Boyfriend is a little rough, but he loves me 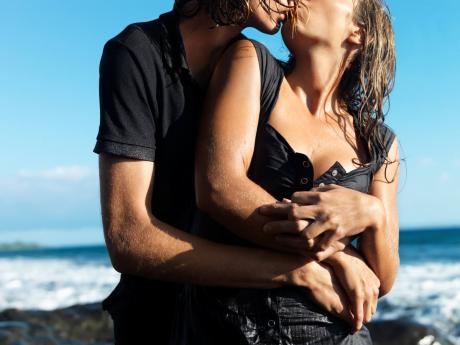 I am 18 years old and I have a boyfriend. He and I have been in a relationship for the last two years. He took my virginity.

Another girl and I had a big fight over him and he stood up for me. She told me that she was going to blind me so that she would be able to get him. She said he was with her first.

He said that one time she told him that she had sex with her cousin, and when he told her that was wrong, she said she didn't see anything wrong about it because her cousin was the one taking care of her.

That is when he got close to me because he said she was not a good girl.

I come from a bad area and he has taken me out of that area and I am now attending evening classes. He is in his 30s. Sometimes he is rough but loving at the same time.

Some of his friends told me bad things about him. They say he cheats on me, but he says that it is because they want me. I believe what he says. I have never cheated on him and I don't intend to.

My mother was ill and she didn't have the money to buy the medication that the doctor prescribed and he took out $10,000 from his account and gave me to help my mother, and now she is feeling well again. She told me to stay with this man.

I asked him if he didn't want a child and he said the time would come but I should try and concentrate on my lessons first.

All the other guys who fooled around me always wanted me to get pregnant. This is the only man who is not interested in that.

I don't know my father. I don't even know his name. My mother said that when she met my father, they were drinking and the both of them were half drunk and they had sex and she got pregnant.

She does not know his name so I have grown up without a father. So sometimes when this man is rough, I keep quiet because I don't want him to leave me.

Right now, I am attending the HEART Academy. Thank you for reading my letter.

You have a very good boyfriend and he seems to mean you well. I hope that you would be true to him and you would not waste his money.

Stay AWAY FROM PEOPLE WHO LACK AMBITION

Try not to keep company with people who are not ambitious. This girl who had sexual intercourse with her relative and defended it does not realise that what she did is nothing to be proud of.

She sees you as the one who has prevented her boyfriend from having a good relationship with her. Try your very best to keep out of her way.

Most men his age would be proud to have children. In fact, they would even brag of having these children with different women.

This man wants you to get an education before he impregnates you. I would say he is a wise man.

I am sure that he has spoken to his ex-girlfriend to leave you alone. I wish this man and you well.

I am glad that your mother is doing better. Take care of yourself.